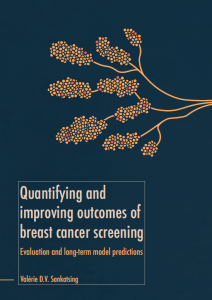 Mammography screening can result in early detection and possibly earlier treatment and better prognosis of breast cancer. In the Netherlands, women aged 50-74 are invited biennially to digital mammography screening. The aim of this thesis was to quantify the effects of current screening in the Netherlands and to determine the effects and cost-effectiveness of alternative screening strategies, using micro-simulation modelling.

With respect to current screening, we found that digital mammography leads to the detection of more breast cancers than film-screen mammography, but also to more referrals and false-positives. The number of cancers  detected during the screening interval is unaffected, compared to film-screen mammography. Further, we found that the breast cancer mortality rate in the Netherlands decreased by 30% since the introduction of screening until 2010, in women aged 55-74 years. Mammography screening and (improvements in) adjuvant therapy contributed to this decrease.

Using microsimulation, we showed that earlier screening, starting between 40-50 years, is cost-effective and increases the screening benefit, especially in women with a high relative risk of breast cancer, but at the same time results in more false-positives. In addition, we found that triennial screening in women with a low relative risk results in a better balance of benefits and harms than biennial screening. Finally, we found that the rather new technique digital breast tomosynthesis, which creates a pseudo 3D breast image, has a lower chance of being cost-effective than digital mammography. However, at a slightly higher cost-effectiveness threshold than currently used, tomosynthesis becomes more cost-effective than digital mammography.